At KeepTruckin we make extensive use of AWS Lambda Functions because of ease of use, inexpensive pricing and scaling capabilities.
Currently we have over 150 Functions! So we are heavily invested in AWS Lambda.
However, with this many Functions there are some pain-points.

So before I dive into the overview and implementation of the topic of this post, let discuss the requirements and reasoning behind our decision.

Let me quickly illustrate the flow in words:

We want to upload a “ready to deploy” zip file to S3 so that we can use the UpdateFunctionCode API to update the function.

This is a good candidate for a task that should live in your CI script after the code has passed testing.
It might look something like this if you use the aws CLI and some bash:

I’m not going to go over all the code in the controller, as much of is generated boilerplate.
But I will highlight a couple important portions.

Below is the struct definition which will be used to generate the CRD using controller-gen.

There are a couple of steps involved in deploying a custom controller in Kubernetes.
If you use one of the frameworks most of the required boilerplate will be generated for you, but namely it involves applying the following manifests:

The first solution that pops to mind is to using the AWS builtin functionality, Versioning and Aliases.

Versioning is definitely something that would solve several of our problems:

Okay but how should we manage multiple environments? You might think that using Aliases would be the answer, but you would be wrong bucko…

Note that it’s not IMPOSSIBLE to make this work. For example an alternative solution could have been to use Aliases (preview, staging, production) and based on the ARN (Which can be retrieved through the AWS context in the source code) use the AWS Systems Parameter Store to retrieve your environment variables. StackOverflow Explanation

Pragmatically, this seemed like a bigger change to our workflow than what were comfortable with. But perhaps it’s something worth exploring in the future.

At KT we actually use Terraform for provisioning AWS Functions, but using them for deployment would not be ideal because their aren’t any easy ways to separate our environments.
This article recommends having separate “logical” accounts for each environment.

It’s simply not realistic to try and integrate Serverless when we already have our own Bazel build system.
Although, if KT was a purely a Lambda/Function shop it might make sense to use a more robust set of tools for deploying Functions.

While going through the process of building this pipeline, there were a couple of important takeaways that I would like to share:

The CI/CD pipeline for Lambda Deployments at KT would look more like this: 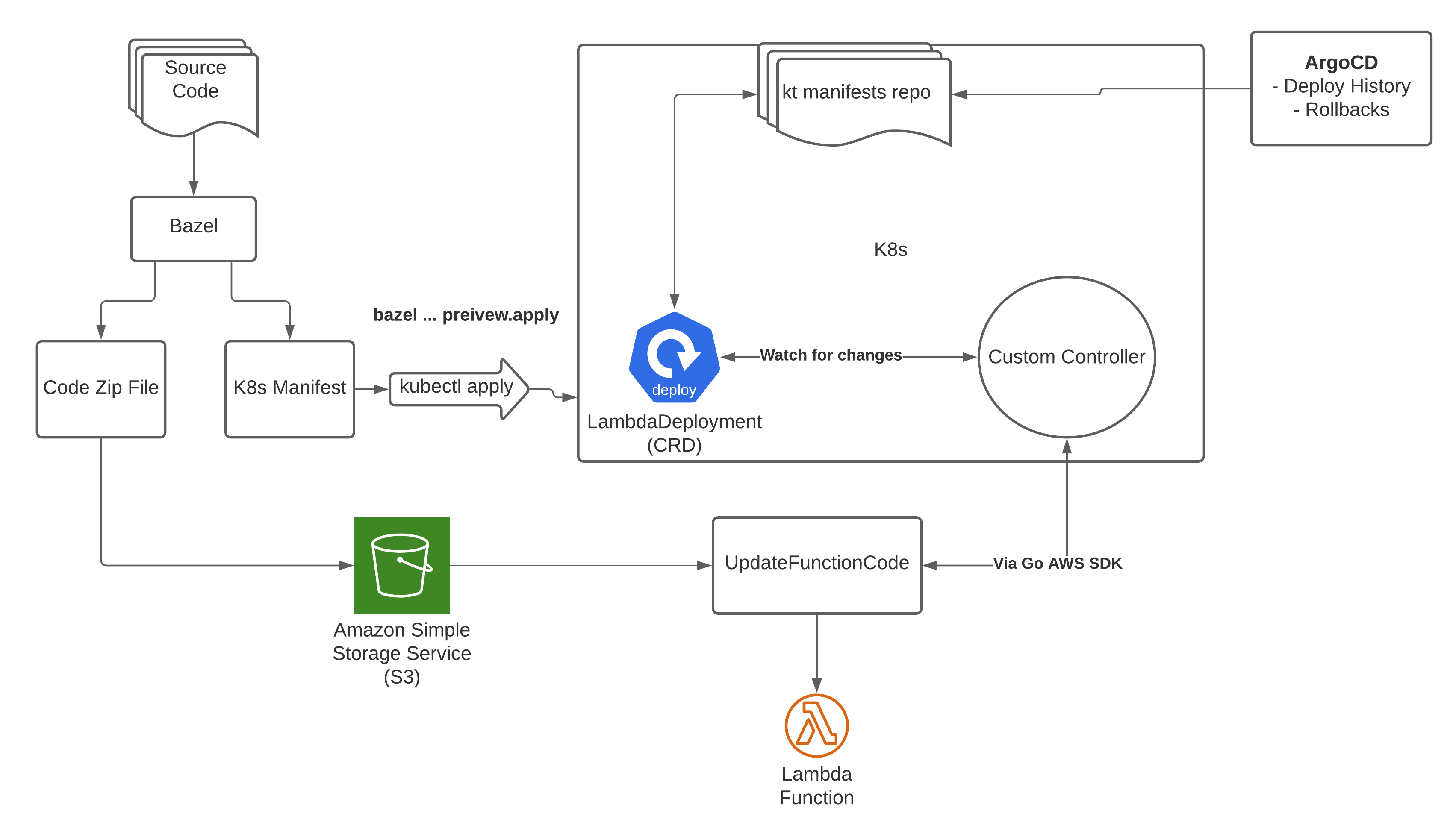 The AWS community is already in the midst of building Kubernetes controllers for various AWS resources (S3, SNS, SQS, ECR, DynamoDB, API Gateway) but they haven’t gotten to AWS Lambda Functions yet 😞.
Hopefully this custom code can be replaced once there exists an official implementation.